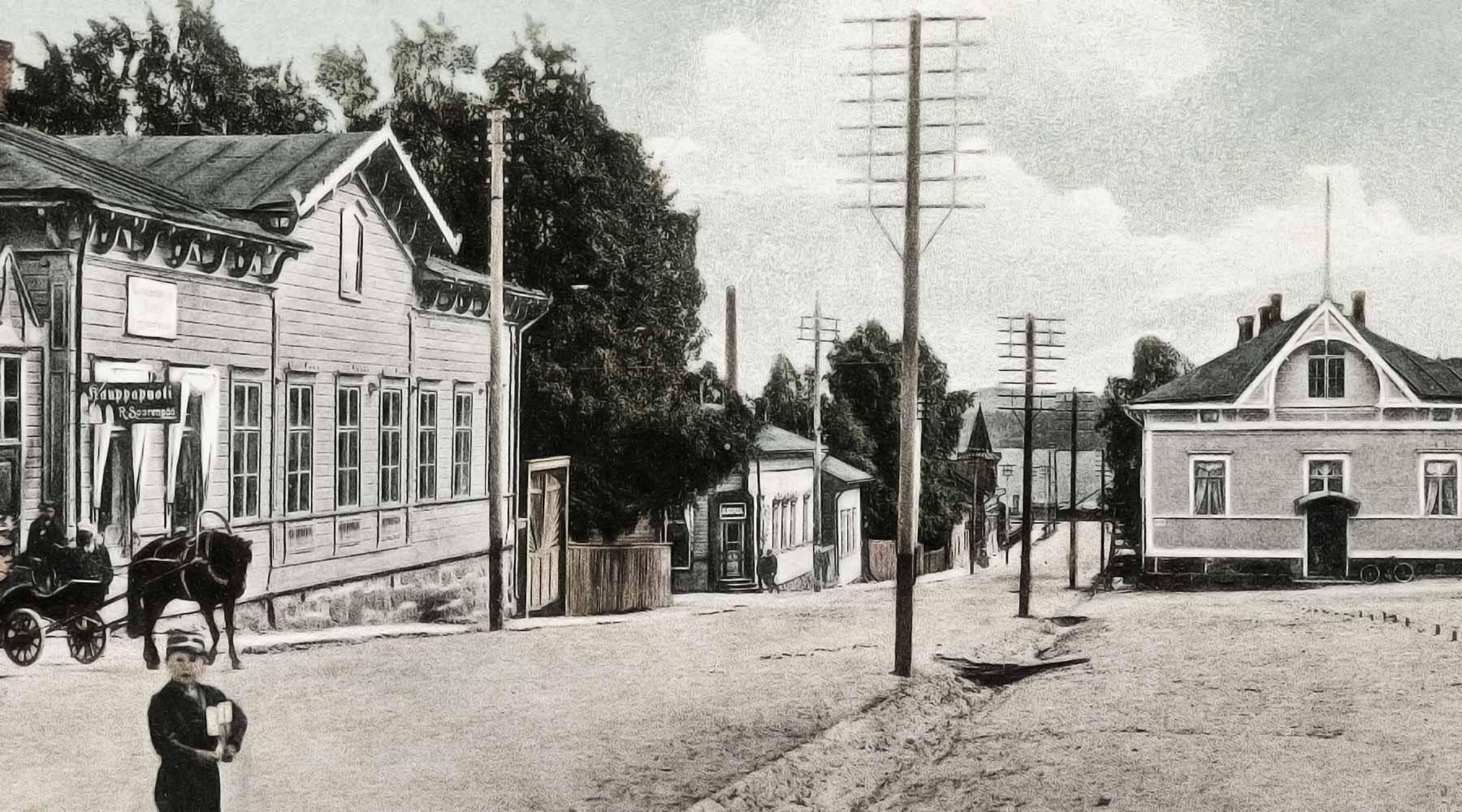 Periods of the courtyard’s history

The Cygnaeuksenkatu 2 plot is the only piece of Jyväskylä’s 19th century wooden town that has survived intact. Craftsmanship has always been an essential part of the courtyard’s colourful history.

The zoning plan for Jyväskylä, which was founded in 1837, was drawn in the shape of a rectangle, as was usual for the time. The number of plots was marked as 143. Among the first plots to be sold in 1838 was plot number 111, the area where Toivola Old Courtyard stands today.

Dyer Anders Nygren moved from Heinola to Jyväskylä and bid on the empty plot for 50 paper roubles in 1838, and soon a two-room residential building for a craftsman’s family was erected on the plot. The dyer himself moved away from the city after the building was completed in 1840.

As a result of the change of ownership, the plot became home to more permanent residents when carpenter Anders Gustaf Sparvin moved into the house with his wife Maria and their three children in 1844.

In the early 1860s, ownership of the plot was passed to the family’s son, Johan Sparvin. As the family grew, they began to build: at first, a three-roomed log building was completed on the lower edge of the plot, and an outbuilding made from timber was built alongside it. A couple of years later, in 1863, a small log cabin was built at the centre of the plot.

A significant change to the plot’s construction took place in 1881, when a small timber shop with a shop floor, warehouse, and stables were built on Läntinen poikkikatu (now Cygnaeuksenkatu). It was built as an extension to the small residential building that already stood on the street. Building the shop strengthened Johan Sparvin’s status as a merchant.

As a result of the construction projects, skipper and merchant Johan Sparvin was able to use the courtyard as accommodation for his relatives and tenants. One of these was the seminary work master Herman Toivola, who moved to the courtyard in 1880. Johan Sparvin also lived on the same plot, and in 1885 Toivola married Sparvin’s daughter, Maria. A year after the wedding, Toivola’s young wife died due to childbirth complications just three days after giving birth to their first son.

Herman Toivola remained in the courtyard with his son, Muisto, and his in-laws. He left his occupation as seminary work master and in 1890 he built a new residential building on the plot, along with his own smithy. Three years later, having trained as a smith, Herman Toivola married Matilda Eskolinen.

Herman Toivola’s smithy was successful. It made machinery, machine components, well pumps, and fire hoses, and employed journeymen, braziers, and metal turners. Several of them lived in the same courtyard and brought life to the young city of Jyväskylä. City residents began to call Toivola, who had redeemed the plot as his own, a factory owner.
In 1897, a large building was constructed where the former Sparvin timber shop had stood. There were two residences on the upper floor. The downstairs had a living room, two kitchens, a washroom, and a storefront. Bushes and trees were also planted in the yard during construction. The completed courtyard was a typical craftsman’s plot, containing both a house and a workplace. Over the decades, the buildings on the plot both alleviated the lack of housing in the growing city and provided additional income for the plot owners.

A maternity hospital in a scenic courtyard

In 2010, the Museum of Central Finland’s craftsmen’s houses were moved to the plot, and belong to the oldest buildings still standing in Jyväskylä. The Coppersmith’s house and the Carpenter’s house have acted as a museum since the mid-1950s. They are rare examples of the oldest construction method in the small wooden town and of life in the 19th century.

After numerous changes of tenants and owners, the plot on the corner of Cygnaeuksenkatu and Hannikaisenkatu has remained intact, entwining stories and tradition with modern operations for the benefit of our generation. Traces of old stories are visible in Toivola’s Old Courtyard. The courtyard was owned by Margo Saxberg in the 2000s and it is currently owned by Arto Hakanen.