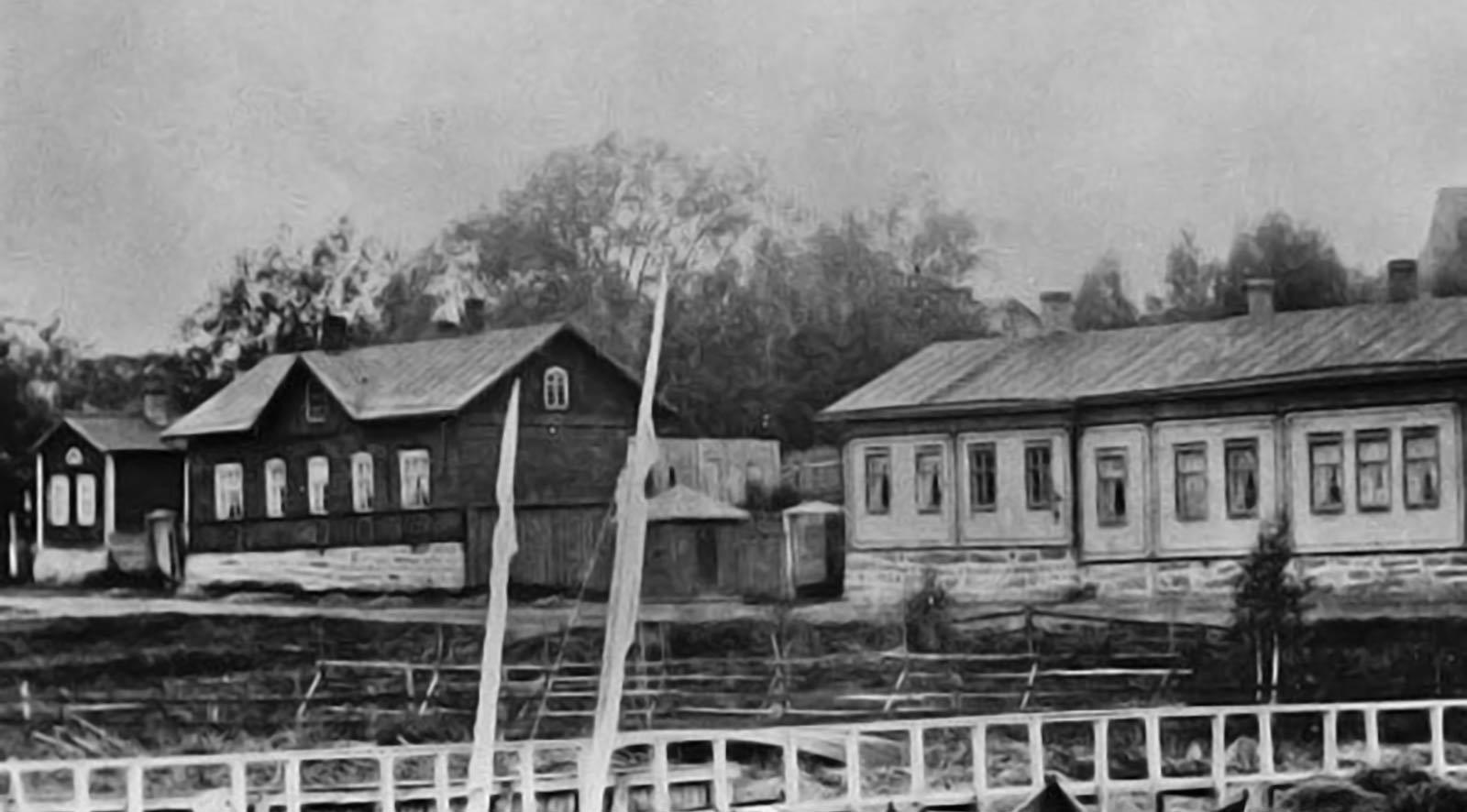 Smith Herman Toivola bought the plot on the corner of Läntinen poikkikatu and Rantakatu (nowadays Cygnaeuksenkatu and Hannikaisenkatu) in 1891. He was already familiar with the courtyard and its residents in 1880, when he had leased accommodation from the then-owner of the plot, skipper Johan Sparvin.

A main building was built on the plot in 1897, when Herman Toivola had a residence designed by Jyväskylä-based Oskari Toikka built along Läntinen poikkikatu (now Cygnaeuksenkatu). The building was modern for its time, with regard to both its appearance and its method of construction. There were two apartments upstairs and a small store, a chamber, a kitchen, and a washroom were downstairs.

A boom in timber trade during the 1870s caused cramped housing conditions in Jyväskylä. Even during the short period that the plot was owned by farm owner Abraham Hoskari from Keuruu, construction took place in the Toivola courtyard, and the number of residents increased.

A residence designed by Smith Herman Toivola, who was still a tenant on the plot at that time, was completed in 1890. The building contained a hallway, kitchen, two chambers and a hall in the wing facing the street.

A couple of years after completion, facing that was typical for wooden houses at the turn of the 20th century was installed, with alternating vertical and horizontal facing. The T-shaped windows consisted of three panes of glass that allowed light into the rooms. The T-model windows became popular in the 1870s. The building below the asphalt felt roofing was painted with oil-based paint.

The smithy designed by smith Herman Toivola was built in 1890. The smithy had an earthen floor and, naturally, a forge. The smithy was built from brick, and its wooden ceiling was protected with asphalt felt. Herman Toivola immediately drew up plans for an extension in 1891, with three rooms and fireplaces.

The risk of a fire on the smith’s plot was carefully considered. As an enthusiastic voluntary firefighter, Herman Toivola fitted his courtyard with excellent firefighting equipment. There were two pike poles, two buckets, and four ladders on the property. A portable fire hose made in the Toivola smithy was also available, and could “transport a minimum of 21 litres of water per minute”.

Master builder Otto Ekman designed a new outbuilding to expand the smithy. First, the old timber-structured courtyard building originally completed in 1861 had to be demolished to make way for the new structure. The building’s interior was given a new lease of life from 1879–1880.

The outbuilding designed by Ekman was completed in 1896. It was joined to the small, adjacent residential building with a covered passage. Two shops with attics, log storage sheds with attics, two outdoor toilets with five cubicles, and a manure vault below them, with a new, stone waste drain. Stables were built for the horses in addition to a barn.

The shops, barn and stable were made of notched logs, while the shed and toilets were made from planks. The building was painted in red ochre.

The Sparvin House was renovated from 2016–2017 and was originally built by carpenter Anders Sparvin’s widow, Maria Sparvin, in 1861. The building is the oldest residential building in central Jyväskylä that still stands on its original plot.
The plot of the current Toivola Old Courtyard had belonged to Anders Sparvin from 1844, but was transferred to his widow, Maria, after his death. Anders Sparvin’s son, the carpenter, skipper and merchant John Sparvin redeemed ownership of the plot from his mother in the early 1860s.

Sparvin House was painted soon after completion using home-boiled Falu red paint. The sources of heat in the chambers were tiled stoves, and there was a stove in the kitchen. Planks were used for roofing, in accordance with the regulations of the time.

The residential building was thoroughly renovated in 1892 by the next owner, Herman Toivola, who was Johan Sparvin’s son-in-law. The previously unfaced building was given facing, as was fashionable at the time, and painted with oil-based paint. The old six-paned windows were kept, and in 1874 the roof, which had been converted into a shingle roof, was covered with asphalt felt.

In 1863, Johan Sparvin built another small residential building on the plot, but it was demolished in 1893. During Sparvin’s time, the oldest building on the plot, a small log cabin built in 1840, was also in a habitable condition. It was left in place on Cygnaeuksenkatu street until the 1910s.

The Craftsmanship Museum consists of the Coppersmith’s House and Carpenter’s House, which are the oldest buildings still standing in Jyväskylä. They are rare examples of the old construction method used in Jyväskylä, which was founded in 1837. The city’s early residential buildings were built along the street; hipped-roofed timber houses with wide, horizontal board facing and six-paned windows. Craftsmen’s houses were often smaller than merchant houses.

The Coppersmith’s House formerly stood at Vaasankatu 27. Shoemaker Samuel Lindqvist had it built in 1842. Coppersmith Carl Erik Sjöblom, who later owned the building, had it extended in 1850. In 1893, the house was bought by postman Otto Wilhelm Helenius, whose family owned the building until it was demolished in 1953.

In days gone by, the house was full of hustle and bustle. Though the house was small, it was a home to the coppersmith’s family and its many children, to journeymen, apprentices, tenants, and to visiting customers – the more the merrier! The Coppersmith’s House was decorated with a coppersmith’s kitchen, chamber and hall, a locksmith’s widow’s chamber, and shoemaker Otto Kukkainen’s workshop and chamber.

This little yellow house used to stand at Cygnaeuksenkatu 12. Hatter Erik Fagerlund had it built in 1844. Later owners included a coachman, a merchant, a butcher, a sausage maker, and a market stall owner. Carpenter Johan Edvard Bäckström came into possession of the house in 1913. The last owner of the house before it was demolished was a descendent of Bäckström. The Carpenter’s House is decorated with a carpenter’s workshop and a journeyman’s room.